Today was really my first official “public” appearance as Poet Laureate. I went to Catholic Central and spoke to a couple of classes, mostly history classes. This was organized by Ellie Csepregi, an amazing English teacher, but also a gifted poet and tremendous supporter of the arts in Windsor. Chad Barrette and Taunia Piknjac Phillips, two history teachers from the school, were 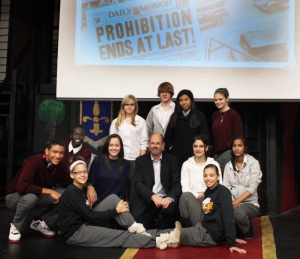 also there. Both Chad 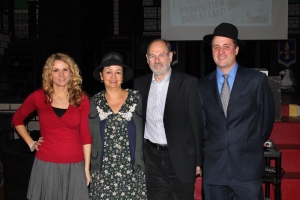 and Ellie were dressed in costumes reflective of the time. A gangster and flapper. Ellie also brought one of her classes to this event where I showed a Keynote presentation on The Rumrunners, my most popular book. The photos in this presentation are from the Roaring Twenties, the period of Prohibition in Canada and the U.S. There are photos of old jalopies laden with whiskey and being driven across the ice to Detroit. There are pictures of women stuffing bottles of booze in their garters, of men in blind pigs and speakeasies, of authorities rolling barrels of alcohol into the streets and dumping them into sewers, of gangsters, of torpedoes filled with booze and being shot to secret terminals on the Michigan side … These are all in my book, and they are part of a presentation that I have been doing for a number of years. I spoke to the students about that little piece of history and how it impacts our part of Canada. Someone asked me how long it took to write. I explained that I first wrote a play about that period, and then went on to write The Rumrunners. It took me about a year. I revised it all a few years ago for Biblioasis. The book hit the market again in 2009 and was an instant bestseller all over again. When it was first released in 1980, it sold more than 25,000 copies.

The classes that turned up in the auditorium at Catholic Central were amazing with their questions. They wanted to know about the torpedoes. They wanted to know about Al Capone and The Purple Gang. They wanted me to tell them how I went about writing the book. This last one is an interesting question because I never considered myself an historian, though I loved history when I was studying it in high school, and later at university. My greatest love is poetry, but in the narrative form.  I am drawn to history at its best when the storytelling is so compelling. I luxuriate in tales of ordinary people, as well as those accounts of the famous in ordinary, everyday situations. I am fascinated by the sense of “place” and its importance to the decisions and behaviour of people. And when all of this comes together, that’s when the writing gets done. 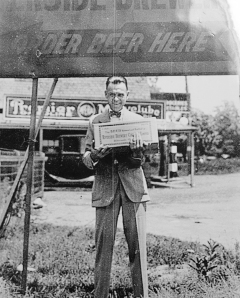