I joined with University of Windsor president Alan Wildeman and Mayor Drew Dilkens of the City of Windsor for the grand opening of the School of Social Work now housed at the corner of  Pitt and Ferry streets on the site of the former Windsor Star. CS&P Architects  retained the entrance and facade of the former Star building, to honour the history of the newspaper that operated at this location in 1923. The Star was at this location till 2012 when it moved to its current location at 300 Ouellette Avenue.

Wildeman greeted four former Star publishers and editors. He said, “Welcome back…Your hands did the work that created the river of news, stories and pictures to which our history is carried. You, more than any of us, understand how much Pitt and Ferry has meant to Windsor.”

My part in the ceremonies was to speak briefly about the 35 years that I spent writing here, but also to read a poem about the old presses that used to roar over a three-tiered facility. I was there representing both the University of Windsor where I am the resident writing professional, as well as the city as its poet laureate. I spoke about how I used to slide down to the press room and watch the men roll out the gigantic newsprint rolls and clamp heavy metal plates to the vast mechanical network. It always fascinated me.

In this photo below by Star photographer Jason Kryk, I am with two old-timers from that paper: Bill Bishop, former photo editor (left) and Jim Bruce, former editor and publisher. 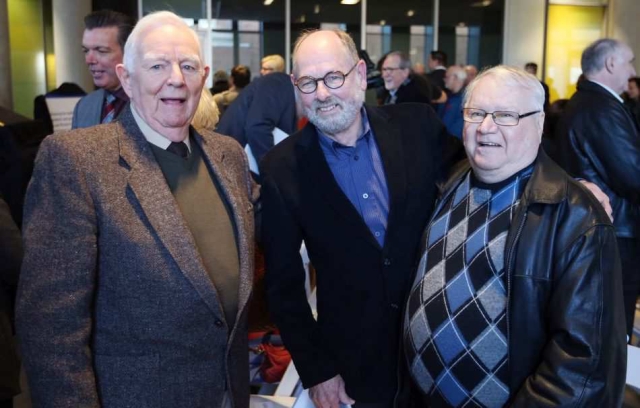 Melanie Renaud of the30.ca from the University of Windsor Digital Journalism program covered the event on Twitter. This is the result:

Lovely chat with Doug Gibson at BookFest Nov. 5. We talked about so many legends in the business of writing, including Alistair MacLeod and W. O. Mitchell. 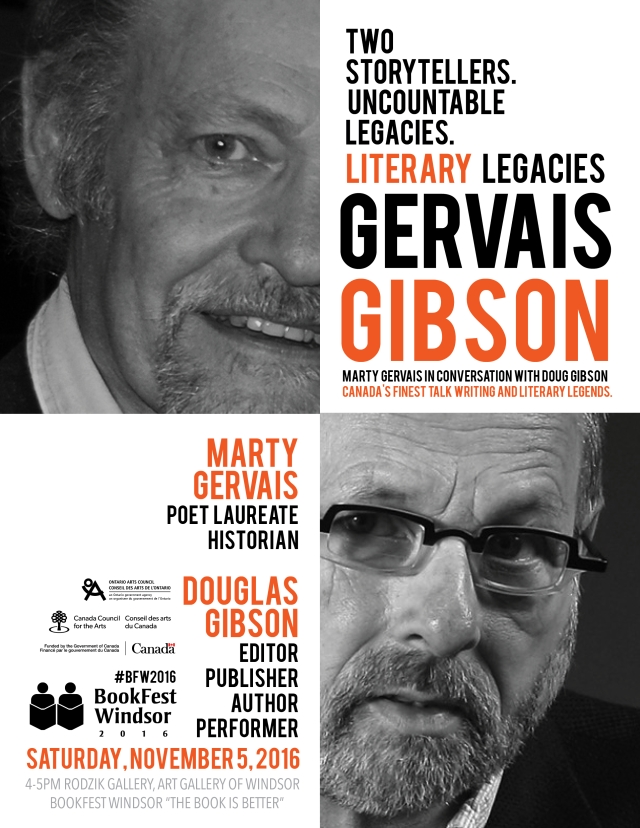 Monday night, D. A. Lockhart, a Windsor-based poet, launched his book Big Medicine Comes to Erie at the Can-Am Indian Friendship Centre in Windsor at a full moon ceremony. The ceremony —a fire ceremony and a Native American practice usually performed every full moon— is a form of purification and welcoming newness in one’s life. I was there to participate in this, and also to hear Lockhart read from his newest book, a collection of poems that paint a picture of the Delaware peoples’ migration to what is now Southwestern Ontario. Here are some of the photographs I took at this ceremony. 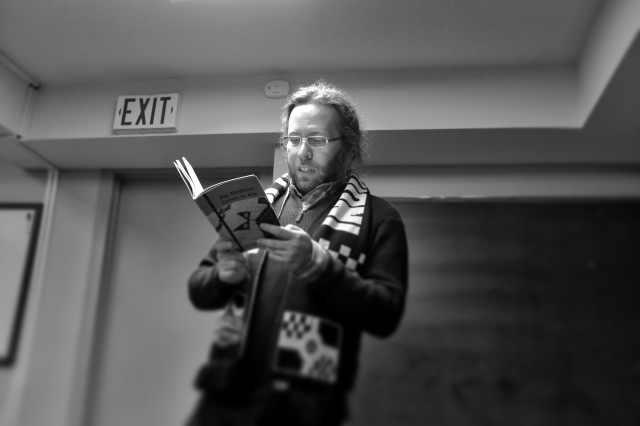 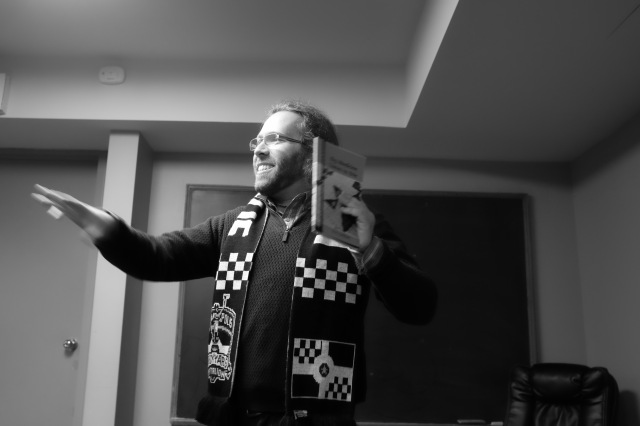 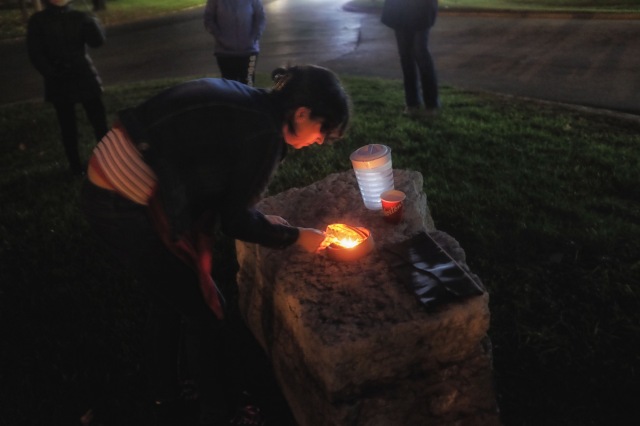 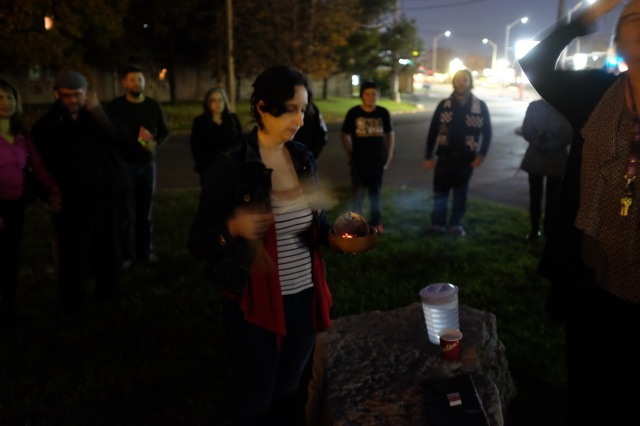 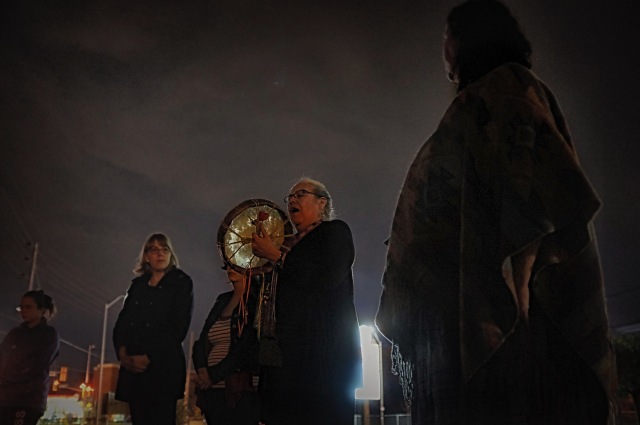 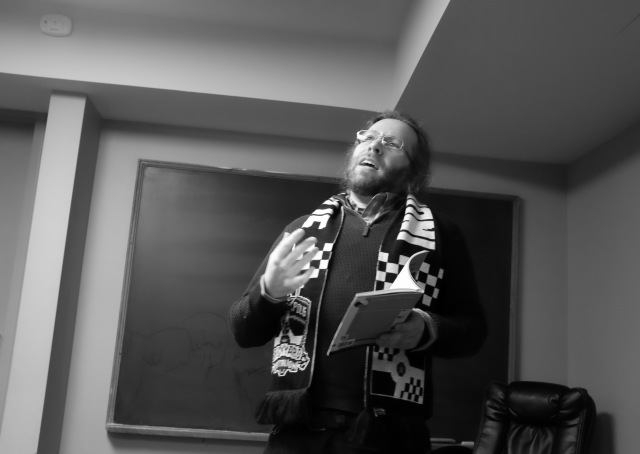 Like Loading...
All day long I have been listening to CBC Radio and listening to Leonard Cohen songs and interviews with him. Cohen passed away at the age of 82 in Los Angeles, California.
Here’s a piece that I did on the occasion of his 70th birthday. It was published in The Windsor Star, Sept. 24, 2004.

Several years ago, I got into a horrendous argument with Leonard Cohen’s publicist from Los Angeles who insisted I didn’t know what I was talking about when I told her that he was from Montreal.
“I’m sorry, sir, he lives here! He’s from the United States! He’s American! Not Canadian. Sorry, you have your facts wrong! Do your homework.”
And so went this see-saw argument that I knew I couldn’t win.
I got to thinking about this when I read that earlier this week Leonard Cohen had just turned 70. It seemed impossible that this troubadour could age. His work still circles about the mysterious, the youthful, with motifs of spiritual angst, beauty and sexuality.
This writer, who indeed was born and raised in Montreal, came to the forefront in the 1960s as a poet and novelist. He wrapped himself in this enigmatic image that piqued the curiosity of readers.
The journalist Robert Fulford recently described Cohen as “a bohemian with the courtly manners of a gentleman on day parole from the 18th century.”
True enough. He was an oddity, someone apart, or self-exiled, from the literary scene in Canada. A renegade bard who in his earlier years followed in the footsteps of his mentor, the Montreal poet, Irving Layton.
But unlike Layton’s poetry, which has come to be judged as slightly adolescent and politically incorrect in the 21st century, Cohen’s work– equally sexist in its themes, in both the poetry and songs — is still somehow provocative and enduring.
I spoke with Cohen about this at a hotel in Toronto in the 1980s. I had gone there to interview him, expecting someone cool, distant and philosophical. He was anything but. He was more like a kid bouncing about with a new toy. And that new toy was in his hands — a spiffy and elegant portable tape player. His smile accentuated the lines on his perfectly tanned face. He handed me the head phones and had me listen.
“This is my latest — I recorded it recently, and it’ll be out in a few months.”
I listened.
“So?” he asked with a shrug.
“Great!” I responded.
Now, I can’t remember the song he was singing. To tell you the truth, I was paying more attention to him watching me listening.
Cohen is difficult to pin down, and when I asked how he regarded the poems, the fiction and the songs, he switched from the buoyant and natural self to that unmistakable aloofness. You can’t really call it arrogance, because there was a trace of coyness in his voice and attitude. You see it in the public figure of Cohen. And here it was again.
“I’ve always felt I was just writing one long thing,” he said.
“The novels and poems and songs are all just part of a larger work. I don’t feel any great division.”
My earliest memories of Cohen go back to the 1960s when he was flogging his poetry and a novel called Beautiful Losers, a watershed work that some claim changed the physiognomy of Canadian publishing because of its daring themes.
But there I was, a couple of rows up in an amphitheatre at York University. It was 1966, and Cohen — then not known for his songs – -read from Beautiful Losers. He then asked for our indulgence because he had a song he wanted to try out on us. He picked up an acoustic guitar, slung the shoulder strap over his head, then proceeded to unfold a paper bag upon which he had scrawled out this song.
“I just wrote this, and please have patience with me, because I’m not sure of this yet, and I’m not sure that it’s finished.”
Cohen started into the song. That song would become a signature of his — a song that launched him as a singer.
That song was Suzanne.
Most likely the first public performance of it.
I told him about that night when I interviewed him and he remembered it. Or said he did.
Our conversation then made another turn. This time, to children. Cohen said his own kids felt slightly embarrassed by him. His music wasn’t their cup of tea.
That was fine, he admitted, amused by their honesty. In a way, he said his children had “mellowed” him, and made him realize he was getting older. Interesting. The last time I spoke with Cohen, he was 59.
I wonder what he thinks now.